a difficult decision – is it the right one?

To ‘offer an olive branch’ is to make good with someone, to try to resolve issues. The definition I found online was ‘to do or say something in order to show that you want to end a disagreement’

Our builder may define things rather differently. He was at a tasting in an olive grove this weekend, and managed to walk into the branch of a tree while not wearing his specs, very badly bloodying his eye in the process

Oh, the irony. He looked terrible, poor man, but assures me it looks worse than it is

At today’s meeting he confirmed that the structure I have found is indeed a very old fireplace, but said that the work required to uncover it (my work, not theirs) would be far greater than I realise. Part of me wants to continue, but once fully revealed it would surely compete with the wooden 19th C fire surround next to it

It’s tougher than I thought, this job!

When we bought the house we knew the building was 17th C, but the huge attraction was very definitely the 19th C aspirational makeover, which was done with some conviction and was largely intact. The danger is the distraction of earlier finds, some of which (the lion murals, for example) will have to be worked in, because they are very special

So I will document this latest find and allow the builders to put plasterboard in front of it, thereby preserving it, at least. I had hoped to avoid using plasterboard, as I know that builders can be overly fond of it, but perhaps in this instance it’s the best thing (however, if you ever see me referring to the use of ‘plasterboard’ in a future post, please stop me!)

We don’t want this house to be sanitised and shrouded in board. It must keep its character, but because of that we must also hold onto a reasonably cohesive scheme – something I was reminded of only today by another blogger’s post

Perhaps covering up this very early fireplace is our offer of an olive branch to the ’19th C’ house we fell in love with:

First step to owning our new gorgeous wreck/house in Quillan

There is movement. Apparently work is about to commence on the roof, and not just sometime soon, but this Monday. I am as astounded as I am excited. Hard though it is to imagine the house without the interior waterfall, I also wonder if this might run for a while yet – I mean, it’s all very ‘sudden’ in contrast to the frustration of the last few months. I am not complaining because this is the beginning of the rebirth of the house

Coincidentally I was given an unexpected opportunity to get some more of my junk down there if I had it packed by yesterday, so this was Thursday’s priority, and I have booked a flight. It all fell into place rather well. Baz is understandably jealous and he feels more than a little second-best to the house. He noticed that I labelled all the boxes with my name rather than our names. I didn’t mean anything by it!

Instead of sleeping in a roofless house, I have succumbed to Plan B (the very comfortable apartment I rented last time) because I can claw back some money by eating in and on heating. And because having a bath and the privacy of a working toilet is just irresistible

After my recent rant which I removed from blogland on the advice of my more sensible other half I now hope that roof work may commence in late March or April. This is SUCH good news and has buoyed me up no end

And plumbing? Well, who cares?

Yes, I am feeling rather upbeat about this French folie, which can only mean one thing: that I have been away from it for too long and have forgotten the reality. There has been rather a lot of rain since my last visit and I sometimes ponder the amount of water going into the plastic barrel on the stairs, wondering if it’s overflowing and cascading over the steps. But then I banish that thought and replace it with the idea of opening the shutters and flooding the house with east-west light. Of course, it’s not as easy as that because the windows and shutters are all swollen and rusted in situ, but it’s a happier thought than rainwater p***ing through the roof, isn’t it

In a strange twist – and there is no seamless way to add this to my post – I need to talk about beetroot. I started to crave the stuff a few years back and now I will happily drink cartons of beetroot juice, eat beetroot soup at lunch, and even dunk my beetroot falafel as well (thank you, Waitrose, for spotting this bizarre gap in the market. I would never normally buy falafel!)

So, what does this mean? I guess either my liver must be in great shape or it’s really struggling. Does anyone else share my beetroot addiction? Or will no-one else admit to its mysterious pink side-effects?!

The rains which hit Cannes area with such devastating consequences on Saturday 3rd arrived with us on the following Tuesday. It was an insane deluge and the thunder and lightning was quite entertaining through the skylight over the staircase. For the first hour the guttering coped with the water, but then I heard the tell-tale drip as the house could no longer resist. I stayed calm but it was going to be a long night

I put a large container in place to collect the worst of it and added towels to reduce the impact on the surrounding marble. This is not the first flood the house has seen and it is unlikely to be the last before we get the roof repaired. I could do no more than that and it was a depressing scene so I shuffled off in my flip flops to the salon to remove wallpaper as a distraction

When I first viewed the house in May I glimpsed some plaster where someone had pulled at the wallpaper, revealing the edge of a design. I decided that working on this was the best way to take my mind off the leak

I started taking paper off and exposed this stunning, though badly damaged, 17th century painting of two lions guardant

It is very fragile and as I did not have the expertise or materials to stabilise it I moved onto another wall in the salon to strip some more paper, only to find yet more designs, some of which are as bright as they can ever have been. The indications are that these designs are all round the room

We are keen to preserve this history under glass, and we feel privileged to have something as special as this. However (and I never thought I would say this) it creates a strange ‘be careful what you wish for’ dilemma. My problem is this; if there are, as it seems, numerous bits of painting around the room, am I supposed to strip everything back to the bare plaster and expose them all? It may sound wonderful and it is the sort of thing I have often dreamed of, but this is also the biggest and most exciting room I have ever had the chance to decorate, and I don’t know that I am prepared to allow the décor to be entirely dictated by someone who died around 300 years ago!

The intended completion date is now 20th August. We are excited and relieved, but we will have to let the notaire sign for us as we cannot get over until the week after. The timing means that we will take possession just a few days before my 50th birthday, which is pretty fantastic. 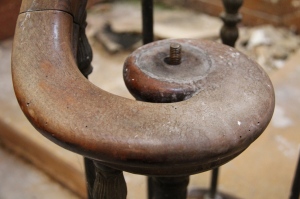 The plan is to go over and ‘camp’ with sleeping bags and inflatable mattresses for a few days. It’s one way to find out if the toilet works(!), and it will help prepare me for the weeks that I go over alone to get the repairs etc underway. Now the sleepless nights will start, as I start to panic about whether Baz will see potential in the building or be disappointed, and if it is as I remember it…..

I had a ton of things to do today but it’s been very hard to apply myself. We set up our account with Credit Agricole, Baz having had an ‘interview’ on 27th July. He just told me off for putting our French address on the payment instruction to the bank, as we don’t actually own it yet. I know he’s right but I just couldn’t resist, so I hope it doesn’t bite us. 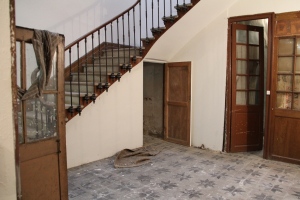 We are very aware that August, the month of doing nothing in France, is almost upon us and we still don’t have a date for completion. On top of that I am away for a week. In the absence of real progress I’ve been struggling to keep my mind on work so I occasionally break off to Google stuff. It’s mainly harmless, but it can lead to me buying bits and pieces, as well as to schemes in my mind becoming grander. Or more time-consuming, at least.
We have both looked at the photos so many times now, and despite having quite a lot of them, it’s all getting a but tiresome. I wish I had taken a bloody tape measure with me to the viewing as we are constantly trying to guess the dimensions of rooms. Last night we were trying to figure out what size the courtyard is, based on various possible dimensions of the floor tiles. Obviously we don’t actually know the sizes of the tiles, the doors, or anything. So we’re still none the wiser…

Gill(coteetcampagne) and I have been discussing chinoiserie and she sent me this lovely picture. The sweep of the staircase is so elegant and the wall design is stunning.

Chinese handpainted wallpaper for one of the bedrooms would not only be wildly expensive, and the preparation of the walls is beyond us. Rather than give up, I am looking into various stencils and have found several which are almost there, but not quite:
http://www.stencil-library.com/chinesestyle-panel-stencils/003488-CHI0013-1/panelno1stencil.html
https://www.hennydonovanmotif.co.uk/chinoiserie2.htm
But I want something all-over and cohesive with a variety of intensity in the pattern while still forming a united design, rather than just stand-alone panels like these stencils. I may put the elements together from smaller stencils instead. Obviously this would be time-consuming and we would need to plan it thoroughly, but I need to find all the right stencils first. And do some practicing, as I have not stencilled since it was last fashionable – in the 80s!
The great thing about this style is that it can suit so many tastes – light and airy, dark and brooding, vivid monochromes. The colour possibilities are endless: yellow, green, blue are all favourites of mine, and for our house I want quite an intense background and perhaps a touch of bling to set it off. A silver ceiling?