Inspiration from the past 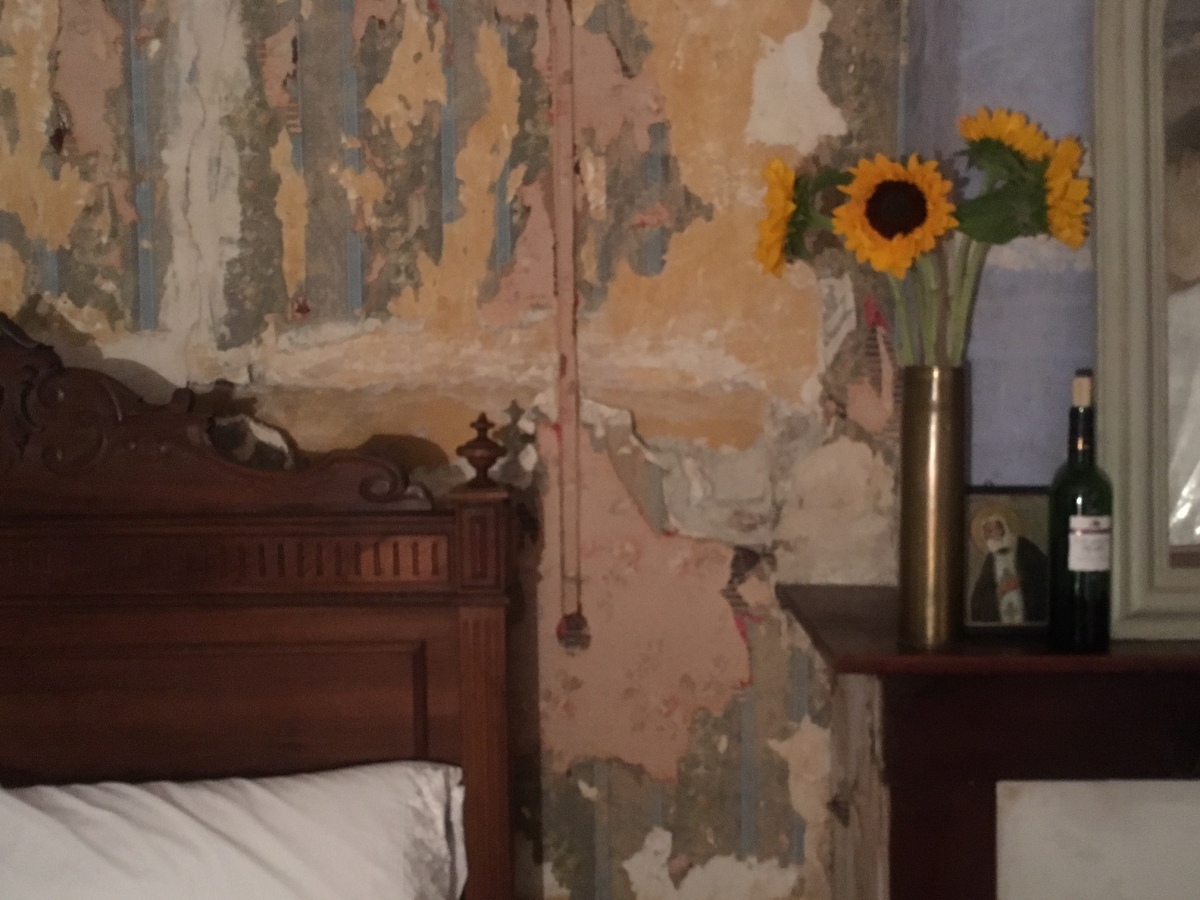 The bathroom sink needed a splashback as I removed the cheap old off-centre ones that the plumbers kindly left behind(!), but it measures 55cm across so if I used 4 x 15cm tiles they would ‘hang over’ at each side, which I don’t like at all. Plus, I don’t want modern tiles, don’t like tiles that pretend to be old, don’t want real old ones because they’ll be chipped and I can’t afford these beauties (and they’d still hang over at the sides)

Until a few years ago bathroom and kitchen paints were brilliant white. That was it. Oh, and they were shiny. Now, all the good paint companies produce paints which are wipeable and low sheen, suitable for use in bathrooms. My personal favourite is Mylands* marble matt, and I have used ‘Museum’ in the bathroom

We all know how Anaglypta wallpaper had gone totally out of favour by the seventies, and by the eighties no-one other than me seemed to like it (and Therri, whose hall in her Victorian council flat in Wood Green had fabulous anaglypta up to the dado)

I still have a soft spot for some Anaglypta and Lincrusta designs. I covered marine ply in a scrap of ‘Paradiso’ and painted it in Museum, waxed it and edged it with a few black pencil tiles (seconds on Ebay) 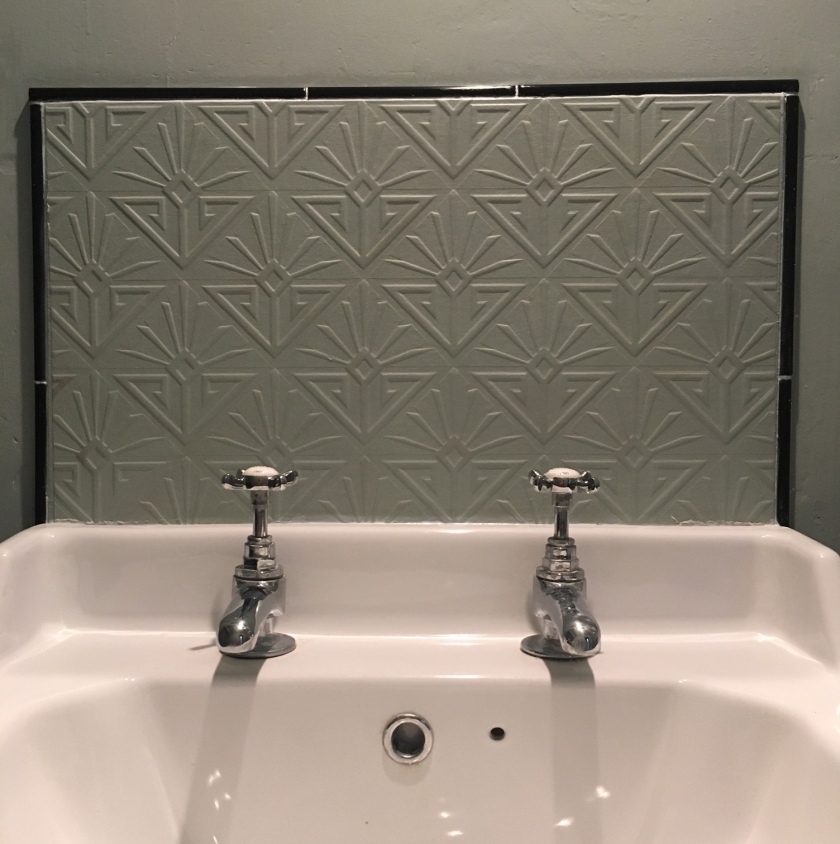 *Mylands sent me the wrong product a few years ago. I always check the colour before opening the tin, but didn’t notice that they had sent me the wrong type of paint so had already jemmied the lid and started painting before I realised. I sent them an email, fully expecting a battle of the ‘but you’ve opened it and used some’ variety, but instead they immediately accepted their error and handled the situation quickly, efficiently, and pleasantly. I can’t say enough for them for that. Plus, they have wonderful water-based paints

(I don’t get paid by Mylands, I promise!). And apologies for more phone photos

Baz arrives tomorrow so I hope he likes what I’ve done. The sunflowers and red wine in the bedroom are just my back up plan …

The clouds brought the night, and the night brought a crazy wind that howled down the street, clattering and banging shutters and all else in its path. At least the night would not be too stifling after such a scorching day

I arrived in France last night and worked hard today. Baz is joining me with C and her friend next week. They’re taking the only ‘clean-ish’ room and we were expecting Baz’s sister as well, but she decided to wait until next year. I’ve only now realised the extra stress that this would have put me under – we just haven’t had the time and money to make enough progress this year (still just one unfinished bathroom, no kitchen and no guest room)

My task was to somehow locate and put together enough components of any one bed for Baz and me to sleep in and then clear enough space in a room for that bed. Sounds easy, you’d think, but I admit that at one point today I thought that failure actually WAS an option

I bought the bed with this year’s Christmas money from my mum. When the usual courier collected it he texted that it was ‘in pretty bad condition’. I have no idea what he had expected, but I was very happy when it arrived back. Sure, it had some missing and broken slats, but they’re just rough bits of wood and could be replaced. Call me superficial, but what I look for in any piece of furniture is elegance and style

It has three of its four original castors. No-one’s perfect. And, honestly, you can’t tell now it’s propped up

So I supported the headboard, the footboard and the sides on various blocks of wood and bolted them together – normally Baz would help me. I then cut and replaced the four new slats before the realisation hit me that we had no flat base for the mattress to sit on

You see, I found this enormous painting on Ebay last year, around the time of my birthday. I was quite sure the picture would go for a lot of money and could never be as lovely as it looked online, but I also knew that I wouldn’t rest if I didn’t at least try…

It was a Friday night. I had put in an early and best sensible bid and I tried not to think about it too much while we were at a neighbour’s house for drinks. When I saw that I had won the auction at the reserve price of 115 Baz told me to calm down. Because he also knew that I’d be disappointed when it arrived

We were both wrong: it is even lovelier than I could have hoped 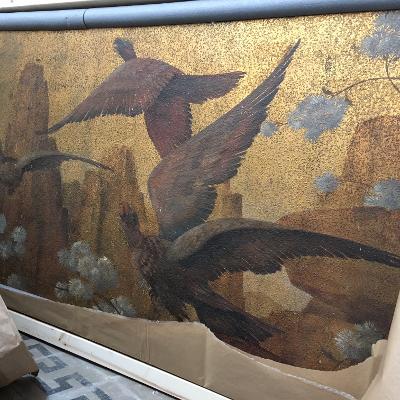 So whereas I usually try to re-use packaging, for this we built a spanking new plywood case (it’s 1.5 metres across) to keep it safe on its journey to France. But of course once it arrived, every time I walked past the empty case I felt very wasteful

The hand saw was no-one’s first choice to do the job – and nor was I – but there were no other available pairings. It took about 20 minutes, 2 cuts and most of the plywood to make a simple two-part bed base, leaving just screws and some useful lengths of wood from the case for another project 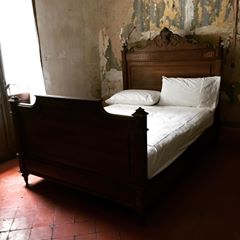 Of course, no-one will see what goes on underneath the mattress (I did a fairly good job anyway). What matters is that the bed is publicly FABULOUS

I like the rough luxe quality of this room, known by us as ‘the Big Cupboard Room’. I think this should be our regular bedroom from now on. The floor tiles are lovely and the partly-stripped wallpaper is very cool, so I’m in no great rush to change it until we’ve got a room ready for guests