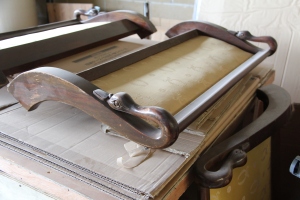 So I bought some daybeds months ago when we were trying to buy a (another) wreck, this time a Georgian place in Dorset, which had an impossible lease/contract and was falling down beyond repair. These are actually French swan neck daybeds which will make a nice pair of small sofas. They need total refurb, as the existing bright yellow silk fabric has faded unevenly and has stains on it (yuck). I got them on good old ebay and little did I know at that stage that they would be going back to France to live. I will need to re-do the woodwork as well, so I have bought a book on French polishing and will need to decide what the best course of action is. At this stage I picture these going in the tiled covered courtyard area at the bottom of the stairs,.

Today, nearly 5 weeks after having the offer accepted on the house in Quillan we have finally been able to return the Procuration and pay the 10% of the purchase price to the Notaire. I am so excited I could just explode. These are a few of the photos I took when I viewed the house, but there are a lot more! It feels like a crazy derelict film set and there is no sign of anyone having done anything to it since 1970-ish. The design on the walls in the so-called ‘Club Room’ (6th picture – will explain later) is actually fabric rather than paper. The same thing has been done in  the ‘Jewel’ room (with the stained glass French doors to balcony). This is love. True love. I can see the next few years of my life being spent trying to restore this amazing house, and I cannot wait! The fireplaces look to be in pretty good decorative nick except for the black one in the salon, which someone has tried to forcibly remove, and so broken in the attempt. I am sure we can get something done to reinforce it. I also found a small area of hand painted design on one wall, which may be the last remaining trace of the original 17th century building. I am sure the fireplaces are later and that someone remodelled the entire place into a very grand house in the late 18th century, but hopefully I will be able to find out more once we have the paperwork and the keys.