Items I can’t keep my hands off

It’s hard to do justice in photos to this wonderful hand-made jug, which was in amongst a pile of stuff at a vide grenier in a car park. I could only just reach it without falling into the junk in front

The lady suggested twelve euros. I had the jug in my hands by then and was not letting go, and I was already trying to get my money out when she reduced it to eight euros

Well, who was I to argue?

Back home, I found that it doesn’t hold water, and I haven’t quite identified the leaky seam. No matter: Baz has a shower gel bottle that’s exactly the right size to use inside as a slip vase, but until he’s finished with it, these daffs are paddling in a small plastic bag 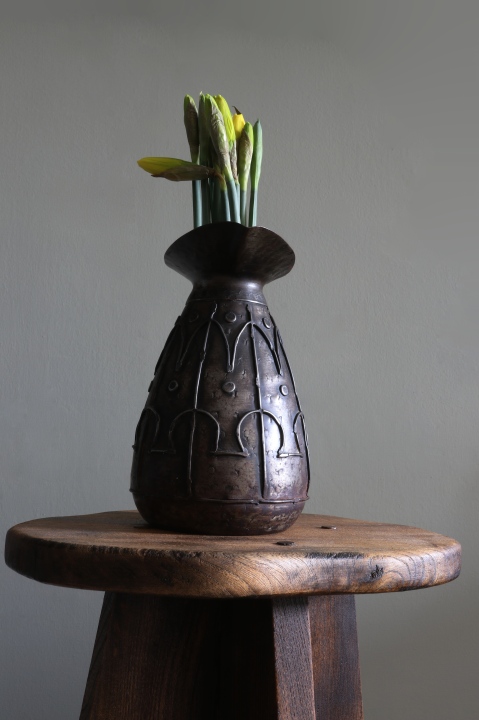 I don’t know anything about this jug, though there is a strong Arts and Crafts influence. It certainly has a wonderful patina and is lovely to hold – I pick it up whenever I walk past

The stool (probably elm?) had been kept outside in a past life. Although beautiful, it was weathered and had grey lichen clinging to it. Still, it cleaned up beautifully and drank in a hard oil treatment. It’s now a much-loved indoor piece, both as a smooth beautiful seat and as a prop. The beaten finish and applied decoration on the jug could as easily be 1970s or early 20th Century. If anyone has anything similar and can help me date it, please let me know… 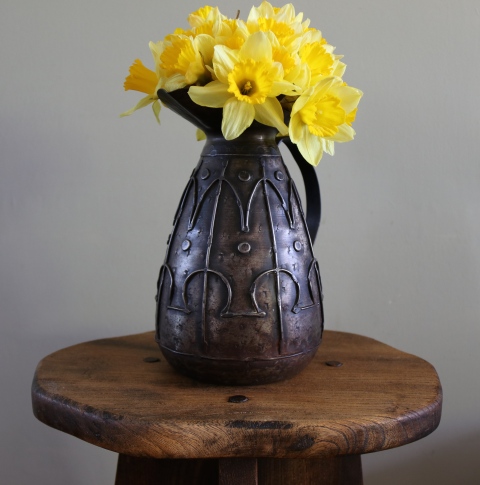 And daffs – well, who doesn’t love daffodils? In last week’s snow, we woke to find to find that a lovely neighbour had left these on the doorstep, a bunch stuffed deep into each of Baz’s chicken shoes to keep them from blowing away

Bexhill on Sea has a renowned art deco heritage and I have long regarded it as a sort of Deco mecca, but I am going to stick my neck out here and admit that when we first got there I was not impressed. It is the sort of seaside place that is suffering from lack of employment and it felt a little downtrodden (if you live there, please forgive me and read on). We had driven for hours to collect some lights I had bought on ebay (thank you, Mum!) and I was expecting to see plenty of Art Deco

The De La Warr Pavilion did not disappoint and the sun came out right on cue. The building is used as a cafe/ gallery/ meeting space and is by no means immaculate, but the bones of it are still as clean and pure as ever, and it was refreshing to see it living in the current day rather than being a museum

The staircase wasn’t easy to photograph because there was a bearded violinist* hanging around who was intent on diving into every shot as I lined it up. But I love a challenge

Any schoolchild could tell me that the success of its curves is due to the golden mathematical ratio identified by Fibonacci. I failed to grasp the concept when Charlotte brought it home at at age 8, but at least I recognise it in practice

This is a public building, beautifully sited and built to withstand heavy usage. There are no flourishes here, no quirky art deco details and in fact no attempt at decoration at all. The building simply functions and serves, while adding to the landscape

The pavilion still looks stunning from outside too, and the view is directly out to sea. It’s incredible to think that this building is now 80 years old and despite being built in built in 1935, it remains modern 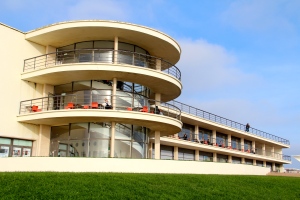 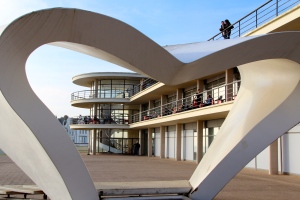 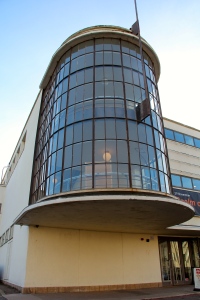 There were other happy surprises for us as well. The Bexhill seafront has a lovely terrace of beautifully-kept arts and crafts villas, with long elegant gardens leading down to gates onto the promenade

And there was a wonderful home on the seafront which had been turned into a work of found art and proclaimed the legend, ‘Let the sea all worries wash awai’

We had very little time to do justice to this very British seaside town, and for all we know we may never go back, but I am pleased that we finally got there. Perhaps the most surprising thing to me was that there was no sea of like-minded people armed with cameras and that most of the people we saw walking around were clearly local. The focus of the building was on usage rather than admiration, and perhaps this is testament to its success

* I say ‘violinist’ only because he was carrying a violin. I didn’t hear him play it or use it as anything but a prop, but I will give him the benefit of the doubt.. There were also 2 girls doing vocal exercises at the bottom of the stairs. I haven’t referred to them as ‘singers’ because anyone craving attention can warm up their chords in public. At least they moved out of the way before I started taking pictures