When is housework a good thing?

The house now has heating, so I’ve stuffed random packing materials into every possible cranny to stop the heat going into the roof-space and out of the windows. There are a lot of crannies, but there’s a heap of bubble wrap

I close doors to keep the heat in wherever possible. It feels good – mainly

Note to self: don’t close that bloody kitchen door again (there’s a very good reason why I’d never seen that door closed before and it took me over an hour to break in on Sunday morning)

I sit alone, having my coffee, lunch and evening meal at the recently unpacked and rather grand dining table in the grand – slightly derelict – courtyard. What else could I possibly need?

Well, wifi, as it happens

The father, Emile, was the mayor of the town when the first electricity turbine was installed in 1890. It would have been a very exciting era, and it makes perfect sense that he and/or his wife would have remodelled the house around that time

I found out that one of his sons helped found the town’s first ever rugby team. I’ve even seen a picture of him, cross-legged in front of his team mates

Sadly, I learned that this son died aged twenty eight in the war in 1914, and so did his older brother in 1918. Emile’s third son – another talented rugby player – was apparently also injured in the war and died prematurely. According to a local gentleman’s memoirs it was his widow who remained living here, and the ‘beautiful’ house was virtually abandoned after her death

We look through the panes of glass they looked out of, the shutters and doors have survived, the staircase and the tiled floors that they trod all remain

For some time, one of the simple terracotta tiles upstairs has interested me. It was so obviously different but I couldn’t move it and was afraid to damage it. Yesterday I tried again to lift it and this time the tile came away easily when I caught the corner just right, dislodging the loose dust that acts as grout and revealing that it was neatly wrapped in newspaper 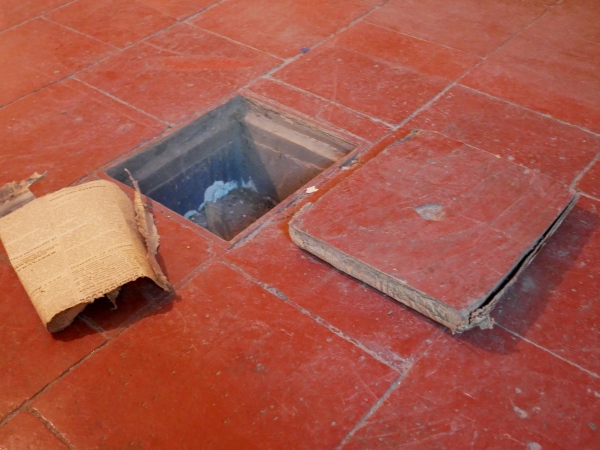 Underneath it I found a small but perfect underfloor safe. All it held was a few scraps of newspaper, but I felt a real rush, because this had remained untouched for a very long time. The dirt and the newspaper had ensured that the tile sat soundly and was not easily found, perfect for hiding valuables. Only someone scrubbing this floor would have noticed it

So maybe housework isn’t all bad!

I have replaced the tile, leaving the newspaper undisturbed for now. I will try to date it later, but one of the items I noticed in the paper looks interesting …

I wonder what other secrets remain in this house