Today’s meeting with the builder, the plumber and the electrician was another roller coaster. This time it was ‘Non, non, non’ from Jerome the plumber. ‘Non’, there isn’t enough in the budget to do what I want. ‘Non’, we can’t keep the art deco bidet (that was a solid ‘non, non, non’ on its own) and ‘Non’, the soil pipe isn’t working because it runs flat through the cellar to the road, due to several beams. So we’d better stop using the loo for a while. Despite this, we are undeterred. Baz and I aren’t going to let this trio of experienced French artisans pee on our campfire. Non

We plan to up-cycle the few bits of furniture we found here and put various work surfaces on top to make a kitchen next to the garage. Now we need to make sure that none of these tradesman chucks anything away, as to them it is all junk. They may actually be right about some of it

But we’ve had some luck recently. Some months back a company importing stone a few doors away from our office had done a runner and left their unit, so Baz called our landlord to tell him. Baz asked if we could have a look inside when they sent their people in to clean. His response was ‘Go for it’

The tenants left it in a horrible mess, with live electric wires hanging all over the place, several inches of stone dust and a blocked gully full of contaminated water. It took weeks to clear and repair the unit, but thanks to the help of the clearance guys we scored two sparkling white kitchen table tops still in protective plastic, as well as some carrara marble, and a stunning transparent piece, ideal for bathroom shelves. One guy gave us some smaller red pieces too, and he was so enthusiastic that it seemed rude not to take them. They will certainly add some colour somewhere

The joinery company next door has given us an enormously tall wardrobe with huge drawers, which was removed from a London house. It is heavy and beautifully made, with lovely  glazing bars and fielding. If we hadn’t taken it the whole thing would have been trashed, which would have been such a waste. So we have the bones of the kitchen for free 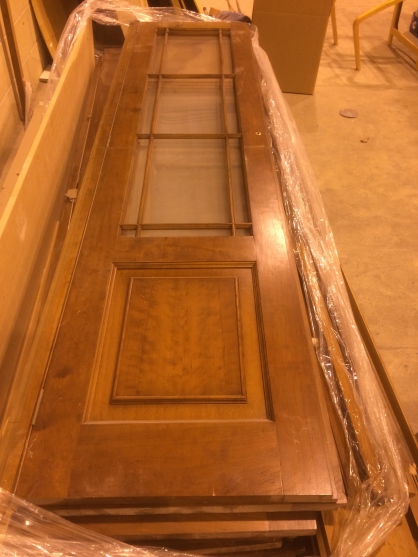 Now we just need to move the electrics, knock down the dividing wall, install gas, get a new boiler and running water and somehow find a solution for the soil pipe….Oh yes, then get all this down to France. And build something kitchen-ish

Enough. I must stop using this blog as a to-do list. It won’t make it happen any faster!