A friend came to visit from Provence on Tuesday. She arrived mid-afternoon, bearing bread, cheese and champagne (she even brought champagne flutes) so I abandoned yanking fabric from the walls and we enjoyed a lovely boozy afternoon snack. Her plan was to stay overnight but due to car trouble she has been here for two. This has been priceless because she had brought her work clothes and she helped me with the dirtiest jobs possible – clearing things from the attic, and bagging up about half a tonne of charbonne from the second floor (we carried it down all the stairs to drop it in the garage with the other several tonnes). It would have been impossible for me to do alone and it took the entire afternoon, working solidly. We looked like Dickensian chimney sweeps when we finished, but it is a relief to have achieved it. Of course, the house is once again filthy throughout, covered in black dust!

The other unexpected bonus is that she has been staying at a quirky B and B down the road, an enormous house which I have wanted to go inside ever since I first came here. We went down to check her in and the owner, Guy, very kindly offered to show us around. It has amazing original belle epoch ceilings and is a masterpiece of recycling. He even has a terrace with a fantastic view of the mountains, something we can never have 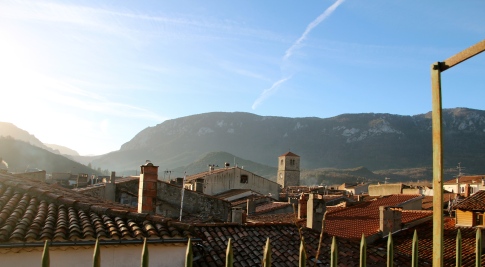 This incredible paper sculpture dominates the courtyard. It was made by a Brazilian artist who stayed at Guy’s house. He was full of ideas, and suggested using our courtyard to screen films, projecting them onto the huge wall. Well, we just have to do that, don’t we! 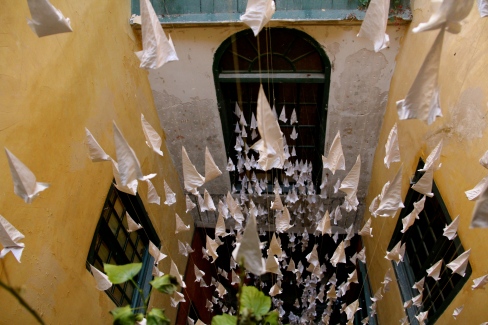 Guy knew the lady who owned our house. Apparently she fell totally in love with the house but her husband would not move from Castelnaudary. So she never got to live in it, which was a source of great sadness to her. He was clearly very fond of her, and he spoke about how she was a very attractive lady, not very tall, and always well-dressed. She didn’t walk well towards the end, he said. A few years back she was paying Taxe d’Habitation because there was furniture in the house, and she called him to ask him to clear the everything out. It must have been terribly difficult for her, because she was giving up on her dream of living there. Apparently she hoped that whoever bought the house would be in love with it the same way, so it seems that fate has played a part here

4 thoughts on “Inspiration and Help from a Friend”